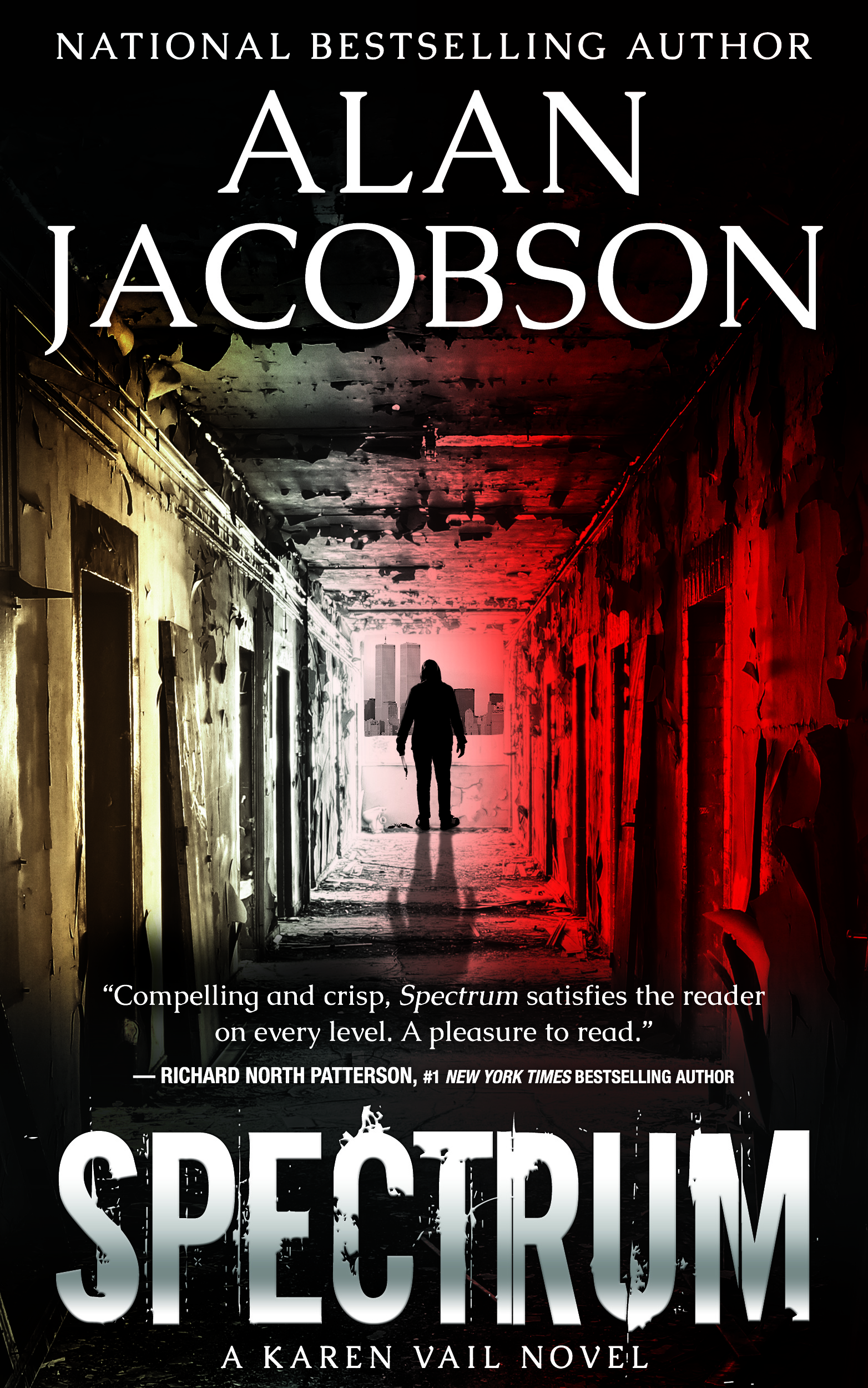 “Authoritative, compelling and crisp, Spectrum moves with a velocity that seems to make the pages turn themselves. Alan Jacobson creates a textured narrative which satisfies the reader on every level, placing vivid characters in an utterly convincing and dangerous world. A pleasure to read.”
—Richard North Patterson, New York Times Bestselling Author

“During my 40 years with the NYPD, I knew the streets of New York and the challenges a detective faces solving crimes in the big city. Alan Jacobson’s Spectrum put me back on the street by bringing a gritty realism and noirish perspective only a fellow New Yorker can provide. Spectrum’s authenticity enhances a riveting, well-told story.”
—Captain Edward Mamet, commander of detectives, NYPD (Ret.)

“Alan Jacobson handles multiple timelines with equal skill and aplomb in the scintillating Spectrum (Open Road, $17.99, 438 pages). The opening chapters not only take his formidable Karen Vail out of wine country, they take her back twenty years in time to her early days in law enforcement as a New York cop. Just as serial killers seem to keep finding her in the present, one especially persistent one finds her in the past. Persistent because the killer who becomes known as Hades, it turns out, is still at it in 2014 and now it becomes personal. Toward that end, Jacobson fashions a brilliant cat-and-mouse game that enjoys an epic quality birthed in their conflict now spanning nearly a generation. With Thomas Harris apparently retired, Jacobson has become the indisputable king of the serial killer form, having mastered every facet of this sub-genre and Spectrum is a pulse-pounding exercise in white-knuckle storytelling.”
– Providence Journal

“Alan Jacobson has written the perfect balance between the present and the past lineage of Karen Vail’s career in Spectrum. …Alan Jacobson does not just tell us a story, he pulls us into the lives of the characters and leaves us breathless until the very last page. ‘Spectrum’ could not be better titled. As the reader, you get to ride along as Alan takes you on a high-speed chase that encompasses the spectrum of the lives of the characters. You will be as committed as our heroes, as they search for a killer who has eluded them for decades. And you will run the spectrum of emotions from fear to anger, from laughter to tears, and from sympathy to disgust as you witness how one tiny misstep in one person’s life can forever alter the lives of many. For fans of Alan Jacobson, this is the book you’ve been waiting for. For those of you who have not had the privilege of reading him yet, Spectrum is the perfect jumping-in point!”
– Suspense Magazine

“For those readers who have yet to read any of Alan Jacobson’s books in the Karen Vail series, Spectrum is number six, yet it would be an excellent novel to begin with. This action packed tale describes Vail’s first days as a New York City cop, and later, her transition from the police department to the FBI… The author, well known for his thorough research before writing his novels, continues his practice in Spectrum. He takes the reader on a journey of NYC and its iconic tourist attractions, restaurants, and landmarks. The locations, cop dialogue, and tactics are spot on, due to the relationships Jacobson has forged over the years with various law enforcement and medical professionals… Readers will enjoy learning that Vail isn’t the perfect cop or agent. Her personal life is often times in tatters, and professionally speaking, she doesn’t always make the right decisions. These flaws actually make her character more credible and endear her to the reader. Spectrum has more twists and turns than a corn maze. Just when you think you have it all figured out, Jacobson throws up a dead end sign and you have to back out of what you thought was the right path to turn down. That’s good writing. Kudos to the author for his focus on even the little things while describing how the police and feds operate. He has truly done his homework.”
– New York Journal of Books

“Jacobson takes the reader into the past so we can follow Vail’s life in law enforcement up to the present, providing a more enriching profile of his series heroine. The final result is a compelling and chilling thriller that continues to showcase the author’s talent for great characters and plots.”
– Library Journal

“Jacobson’s intriguing sixth Karen Vail novel (after 2013’s No Way Out) chronicles the first case that his heroine handled as a rookie NYPD patrol officer….Series fans will appreciate the extensive background information that details Vail’s growth as an investigator.”
– Publisher’s Weekly

“Bestseller Alan Jacobson’s sixth Karen Vail novel is his best work to date. SPECTRUM is an epic origin story that spans decades, tracing not only Vail’s path from rookie cop to top FBI profiler—but also the makings of the killer she’s been tracking for nearly twenty years. …Longtime Vail fans will relish in learning about her early years to say nothing of how Jacobson seamlessly weaves in references to cases from past Vail novels. At the same time, the book is a great entryway for newcomers to the series, since it provides a full picture of the beloved Vail in a story that stands alone. As always, Jacobson’s research on law enforcement procedure is impeccable and brings an authenticity few can match. But in SPECTRUM he also crafts a period piece, vividly taking readers on a journey from 1970s New York to the haunting events of 9/11 to present day. Just when you think you know how it will end, Jacobson throws in a shocker. Without giving anything away, it is fitting that it took Vail’s evolution—her two decades studying the human mind—to bring a resolution to the Hades case. SPECTRUM is as ambitious as it is exceptional.
– The Strand Magazine

“Since the first Karen Vail adventure – The 7th Victim – took the reading world by storm in 2008, Jacobson has provided regular updates on the career of his damaged and dangerous FBI profiler. This book starts with a leap back in time to her days as a rookie cop with the NYPD in 1995. A killer known as Hades tormented the law agencies then, and nearly 20 years later he’s still out there – a clear and present danger. Vail tries to juggle her complex family life and her near obsession with the Hades killer. Her greatest challenge is to bring to justice the serial murderer without losing either her sanity or any of her loved ones.”
– Crime Fiction Lover

“Like a gripping case, Spectrum has all the pieces and evidence there, and if the reader does some good detective work, they will put it all together and know who the killer is by the end, or be pleasantly surprised. Spectrum is the best Karen Vail novel yet and whether you’re familiar with the series or this is the first one you’re reading, you’ll be hooked from cover to cover.”
– Bookbanter

“In Spectrum, Alan Jacobson takes us back in time to the roots of Karen Vail in a way that brings more life to her not only as a cop but as a person. While we know who she is in the present day, Spectrum shows us how she got there through the events and misfortunes that made her the driven FBI agent we’ve come to know. Spectrum is rare in that it’s an excellent entry point for readers new to the Karen Vail series, but also serves as a perfect sixth installment. It’s not just one of Jacobson’s finest novels to date, but one that must have been his hardest to write. He does it so well that it has taken him to new heights as the best of the best in suspense fiction.”
– Mysteries Galore

“Jacobson presents a well thought out and balanced novel, which grabbed me immediately and would not let go. Because he’s an expert at using psychology that twists and turns behind behavior for all of his major characters, and does it in a way that makes perfect sense, the story in Spectrum takes on a dimension and layered effect that makes it fascinating to read. Just be sure to get a good night’s sleep before you start it because you won’t want to stop reading once you start it!”
– Popcorn Reads (Read the entire review here.)