Writing dialogue takes years of practice. I developed the ear during an experimental theater workshop during my English undergraduate studies at Queens College (that’s Queens as in New York, not England). My professor, Richard Schotter, himself a playwright, taught me to let loose, not limit myself, and to, in essence, not be afraid to let the dialogue roll from my fingertips as I hear it in my head. Of course, the “hearing it in my head” part took years of practice to hone. But when I look back on the writings from that class, I see the germination of my dialogue writing style—seeds for what was to come when I started writing professionally.

Why did it take years to hone? Good dialogue is not recording what two people say to one another, typing it up, and calling it good because it’s “real.” It’s real, all right, but so what? Think about what a typical exchange sounds like between you and a friend:

Borrrring. But we’ve all had that conversation with friends. It’s real. But it’s not real good, is it? No, not for dialogue in a novel, or a thriller, where every word counts. If it’s not important—if it doesn’t serve a purpose, or at least move the story forward—it needs to be deleted.

There’s a lot more to writing dialogue than what I’ve shared above, but you get the point: done well, it looks easy, but like any art, it takes time, practice, and effort to make it look effortless.

I’ve always prided myself on writing good dialogue in my novels. As my professor told me, I hear it in my head—then let my brain transform it into a realistic exchange between two individuals that fits those characters. To use an example from my new novel, No Way Out, FBI Profiler Karen Vail character speaks differently from the Scotland Yard inspector she partners with—as she should, for a number of reasons, some obvious and some not so obvious.

I always edit my work later—and dialogue is no exception—but it usually comes out relatively clean in the first draft. That said, I’ve been writing professionally for twenty years. I “get” the concept of what good dialogue should be—and what it shouldn’t be. 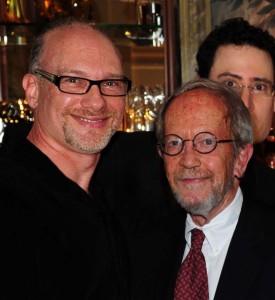 That’s not to say it’s perfect. It’s not Elmore Leonard dialogue. I’ve always yearned to create the kind of dialogue that Elmore has written his entire career. A master at using dialogue to convey shades of meaning, character nuances, and dialect, I once asked Elmore how he does it. How did he learn to write dialogue that way?

His answer did not surprise me, but it did make me laugh. (Actually, I laughed in his face.) So what was his answer? “I hear it in my head.” After I guffawed—and apologized—he said, “What, don’t all writers just hear it in their heads?” I told him, “Some hear it better than others. Let’s just say it doesn’t come as easy to others as it does to you.” Disappointingly, he said he had no tips to offer on how to develop that ear. His point was that you either hear it or you don’t.

That made me recall a conversation I had with James Patterson regarding how he wrote the dialogue of black people so well. Patterson, in case you don’t know, is white—but you’d never know that from his writing (at least, the novels he personally pens). He explained that he grew up in a black neighborhood and played basketball daily with his friends. He developed his ear for dialogue at a young age and it remained with him—and it translated beautifully onto the printed (and electronic) page.

I believe that Elmore was so adept at writing dialogue because he knew people like the characters that appeared in his books. His brain absorbed their intonations and cadences in ways most brains can’t; and he was able to assimilate that knowledge into the written word, into the people he voiced in his novels. It was a true talent, and, sadly, it died along with Elmore yesterday, at age 87. He was unique and we—writers and readers—will sorely miss his talent.